The Diocese of San Diego made its mark on the 77th General Convention of the Episcopal Church. Carroll Levien, St. Dunstan's, San Diego, received the Distinguished Woman Award from Episcopal Church Women for outstanding work in our diocese.

Polly Getz, St. Bartholomew's, Poway, served as the parliamentarian for the sixth consecutive General Convention. She was elected to the nominating committee for the next presiding bishop.

Bishop Mathes participated in the work of the Program, Budget and Finance Committee. In his blog post, he calls it "an exercise in the stewardship of community...holy work." The 2012-15 budget is balanced and reflects a $30,000 surplus. The bishops approved a 19% diocesan asking for the Church, which will drop to 15% in 2015. Article from Episcopal News Service.

Bishop Mathes was elected president of Province VIII, which entails chairing provincial collaboration and resource-sharing. He will organize our province as a regional branch of the Episcopal Church.

Jacqueline Bray, St. Paul's Cathedral, San Diego, received wide recognition for the video she produced with Agape House, the campus ministry at San Diego State University. The video won first place in a video contest and was shown to the entire convention.

Father Andrew Green, St. Paul, Palm Springs, served on the Committee on Structure which produced Resolution C059 regarding re-imagining the Episcopal Church in time for the next General Convention in Salt Lake City in 2015. This resolution envisions a creative task force released to have conversations with the church and make concrete proposals. It passed both houses of the Episcopal legislature unanimously. Andrew was a part of the sub-committee which drafted the resolution.

Father Paul Carmona, St. Mark's, City Heights was a member of the Prayer Book, Liturgy and Church Music Committee and helped draft Resolution A049, which authorized the resources for same-sex blessings. They also created a Service at the Loss of a Beloved Animal. Father Carmona served on the steering committee for the Deputies of Color, and was a liaison to the Latino Caucus.

The Rev. Canon Allisyn Thomas, St. Paul's Cathedral, served as chair of our deputation, and as secretary of the Constitution Committee, and the Rev. Michael Russell served on the National and International Concerns Committee.

Thanks to all our deputies for their hard work and dedication to our Episcopal Church!

Email ThisBlogThis!Share to TwitterShare to FacebookShare to Pinterest
Labels: deputies

This is the hymn that we sang in the Structure Committee when we completed Resolution C095, which calls for creation of a task force to re-imagine the workings of the Episcopal Church in the 21st century. We sang it again on the floor of the House of Deputies when it passed unanimously. We called C095 the "Big Kahuna," because it was our committee's big work. I was on the drafting sub-committee and I am very proud.

Set to the music of "Nettleton," the music for "Come Thou Fount of Every Blessing," written by Dolores Dufner, OSB.

Summoned by the God who made us,
rich in our diversity,
Gathered in the name of Jesus,
richer still in unity.

Refrain:
Let us bring the gifts that differ
and, in splendid, varied ways,
sing a new church into being,
one in faith and love and praise.

Trust the goodness of creation;
trust the Spirit strong within.
Dare to dream the vision promised,
sprung from seed of what has been.

Bring the hopes of every nation;
bring the art of every race.
Weave a song of peace and justice;
let it sound through time and space.

Draw together at one table,
all the human family;
shape a circle ever wider
and a people ever free.

The first General Convention I attended was in 1985 in Anaheim. I was so impressed by the Eucharist because I came from a small church in Compton, Los Angeles, and I had a Baptist background and the music there just never felt right. But the General Convention Eucharist -- well, the music made a big impression.

I think this General Convention is too short. We're not getting the resolutions to where they need to be in time to do much with them. The worship services have been fabulous because of the diversity. You never know what's going to happen when you walk into the worship service. All the Church's diversity is covered in the Eucharists.

The Daughters of the King and the Episcopal Church Women are doing tremendous work here; they're the backbone of our church. Minority groups, too, have a voice here and are doing good work and bring something to the table.

We have to pray about our processes dealing with structure and budget and thank both the dioceses that are giving the asking, and those who are giving the widow's mite. The funds go back to the provinces and dioceses in the expertise and resources that the Episcopal Church can supply.

The key is to put our mission, our service to our communities first, and then not worry about the rest.

Email ThisBlogThis!Share to TwitterShare to FacebookShare to Pinterest
Labels: Butch 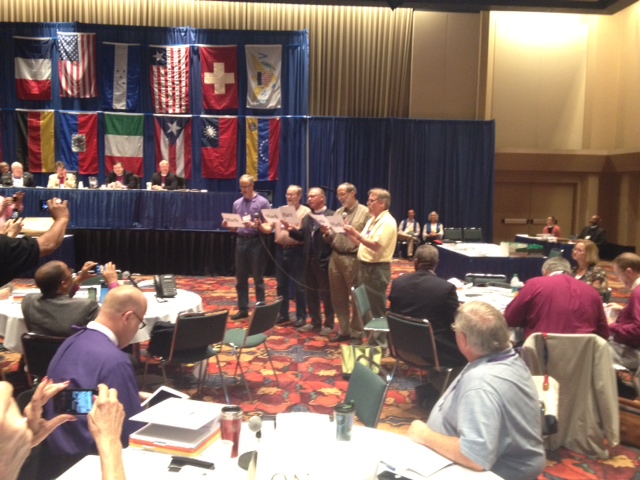 Today is Day Eight or the last day of the 77th General Convention. I think it is fair to say that this has been a rich experience for our entire deputation and others from San Diego who came. The sense of community within our diocesan family was palpable. In some sense, I believe it is something that we modeled to the wider church over these almost two weeks.

Today will be incredibly busy as both Houses work to quickly and responsibly consider all the remaining resolutions. We will break at midday for the Eucharist at which the Presiding Bishop will preach and celebrate.

We will end our work at 6:30 p.m. and the General Convention will be finished. This evening will be our official deputation dinner. Then we will pack, print boarding passes, sleep fast, and fly home. I has been a privilege to serve our wonderful diocese in the House of Bishops at The General Convention. God bless you.

As we end this night, may this be our prayer:


-Bishop Mathes
Posted by St Paul Blog at 7:14 AM 0 comments

Email ThisBlogThis!Share to TwitterShare to FacebookShare to Pinterest
Labels: BIshop

Yesterday was a day in the life of the church. A $111,000,000 budget was proposed for the next Triennium. What's exciting is that the budget is focused on the five marks of mission of the church. It also funds a task force to develop a plan to revise the structure of the church as the church moves forward into the world.

Also approved, for trial use, was a liturgy for the witnessing and blessing of a lifelong covenant in a same-sex relationship. The liturgy may only be used with the approval of the bishop. The liturgy can be used beginning in Advent of this year.

The church also affirmed its commitment to the Anglican Communion and determined that because there are currently several opinions of the Anglican Covenant, the Church will continue to study and follow covenant activities into the future.

What's exciting about all of this is that the Episcopal Church is serious about change, and about finding a new way into the future.

I am reminded of what the prophet Jeremiah said,"for I know the plans I have for you,” declares the Lord, plans to prosper you and not to harm you, plans to give you hope and a future," ( Jer 29:11).

What is going on here gives me hope.
Posted by St Paul Blog at 5:30 PM 0 comments

Email ThisBlogThis!Share to TwitterShare to FacebookShare to Pinterest
Labels: Bill

Someone tweeted this photograph, with the comment ""trust the vergers not only to be handing out chocolate but DARK chocolate!" 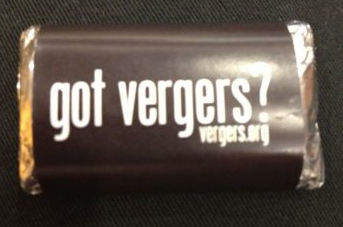 Email ThisBlogThis!Share to TwitterShare to FacebookShare to Pinterest
Labels: photos

Email ThisBlogThis!Share to TwitterShare to FacebookShare to Pinterest
Labels: video

Gregory Straub, Secretary of the House of Deputies, is known for his sartorial splendor (like the checked jacket we showed you earlier).  To celebrate "Dress like Geoffrey Straub" the San Diego Delegation donned paper bow ties. 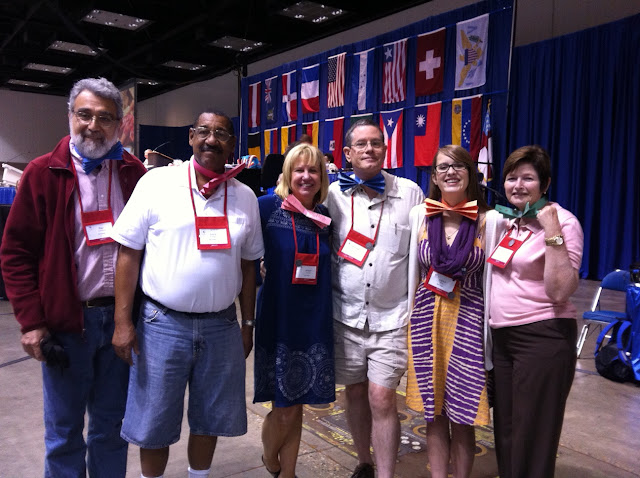 Email ThisBlogThis!Share to TwitterShare to FacebookShare to Pinterest
Labels: photos 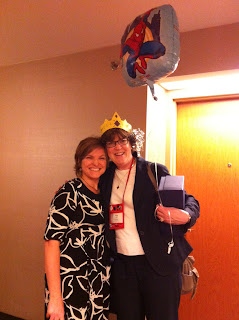 Yesterday was Polly's birthday so we threw her a surprise birthday party in the bishop's suite!
Posted by St Paul Blog at 9:46 AM 0 comments

The last couple of days have been a whirlwind of activity at the General Convention. Both Houses passed a resolution providing a service for same sex blessing. My committee, Program, Budget, and Finance presented the proposed budget to a joint session of the General Convention (both houses meeting at the same time and place). We passed resolutions that neither turned down the Anglican Covenant nor accepted it, but rather committed to our Communion relationships and the continued conversation. Before us today are important conversations about restructuring.

In earlier reflections, I have suggested that our work is the stewardship of community and being a community of prophets. The contours of these seminal actions over the last couple days are fleshing out these themes of action and identity. As someone once said to me, “You cannot be perfectly right. And so it is better to be approximately right rather than perfectly wrong.” I think the Episcopal Church at this General Convention is getting it approximately right, and I am immensely proud.

Finally, I want to also note that our deputy, Polly Getz, is on the ballot today for vice president of the House of Deputies. It is a courageous and graceful thing to put your name forward in this way. Polly has gently made herself vulnerable in this holy work of leadership discernment. Well done, Polly.
Posted by St Paul Blog at 6:59 AM 0 comments

Email ThisBlogThis!Share to TwitterShare to FacebookShare to Pinterest
Labels: BIshop

Seminarian Colin Mathewson volunteered as a page at General Convention. Here's his view of the happenings particularly around Resolution A049, same sex blessings.
Posted by St Paul Blog at 6:52 AM 0 comments

Email ThisBlogThis!Share to TwitterShare to FacebookShare to Pinterest
Labels: video

In the Exhibit Hall 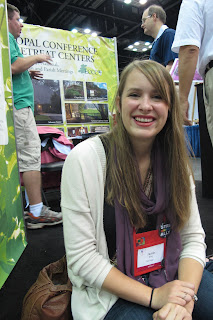 Deputy Jacqueline Bray nominates Polly Getz to be Vice President of the House of Deputies. 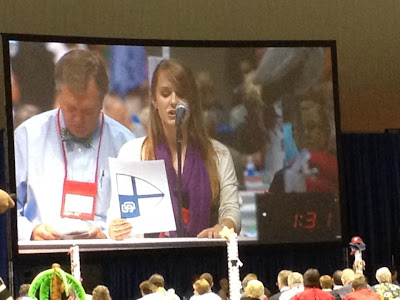 This is the blog of the Deputies of the Episcopal Diocese of San Diego at General Convention 2012.
Additional news via the GC media hub, via twitter at #GC77, and on the TEC Youtube station. Additional useful links are on the Diocese's GC page. 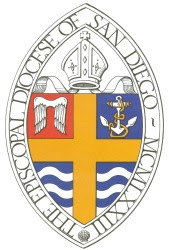